I'm conscious I haven't been updating much recently, but that's because I've been writing. And playing with new ropes. And stuff. 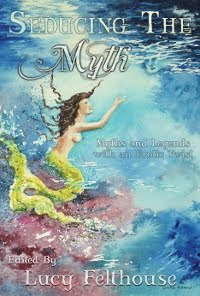 Meanwhile, a short story I did a while back is now out in Lucy Felthouse's edited collection Seducing the Myth (link to Amazon.co.uk, opens in new window).

If you're in the States, the Amazon.com link is this one.

The collection as a whole has 24 tales inspired by myths and legends of Greek, Roman, Arabian, Arthurian, Hindu, Jewish, Norse, Slavic, Sumerian and Welsh sources. There are fairies, mermaids and ancient fertility rituals and, in my story, a smattering of bondage (well, what else would you expect from me?).

My 'Andi in Chains', is a retelling of the Andromeda myth in a pulp fiction style (well, why not?). Teaser:

Forget the rumours. Here’s how it went down, for real. Andromeda – we always knew her as Andi – was one of those rare beauties, the kind who look like a porn star except none of it’s fake. Masses of wavy blonde hair, nice figure, long legs, lips the colour of pomegranate seeds. She knew it, too. Always in shorts or miniskirts and tops that showed a good bit of cleavage.The thing was, none of the guys would touch her. Word on the street was that she was still a virgin, which in this neighbourhood was nothing short of miraculous. Most of the girls here are well on their way to being mums or prostitutes, or both, by the time they’re fifteen.
There was a reason why she was off limits. The reason being her dad, Ceph, was the hardest, nastiest Class A dealer you could think of. You don’t get to be that way without putting a few people six feet under, and everyone knew he’d done it. One time he even nailed a guy’s dick to a telegraph pole just for “looking at Andi the wrong way.”