There's a future orientation: the pleasure one gets from imagining, planning and perhaps discussing what the dom/me and sub will do (or have done to them) in the future. The thinking about how it would work, what it would feel like, the force of the desire to carry the plan into action and so on.

There's a near-future orientation: for example, in a kidnap scenario, knowing that one is about to be kidnapped or will carry out the kidnap. The sense of tension and enhanced emotions that come from knowing it will happen in the very near future, perhaps on a specific journey back from work.

There's the 'in the moment' orientation, and this could be a mix of different emotions. For example what the sub may be going through could be painful. The level of pain may be high and subs may not - because not everyone does - have an inherently sexual response to pain itself. The pleasure may come from other elements, discussed below. Of course the mix of sensations can be, and often are, so overwhelming that the sub ceases to be able to evaluate exactly what they are feeling, and as endorphins kick in they may have a different response. And so on.

Then there's the 'prolonged moment' that may come from a scene designed to take a long period - perhaps several days. Play of this nature can be intense and disorientating, feeling (for example) like a highly realistic imprisonment/interrogation scene to the point that the sub believes it to be genuine and takes a couple of days afterwards to re-adjust to normal life.

Often, there's a comedown from a scene – perhaps a sense of loss that it's ended and a certain amount of time that is needed to come back to reality.

After the experience, there's the euphoria (hopefully) of knowing you've done/experienced it; the moments where you remember some aspect of the scene and grin like a maniac. It may not always be euphoria, though: in some instances submissives, in particular, feel that what they've experienced is a kind of spiritual ritual or a catharsis; those I know whose kink is more towards a sense of 'slavery' or servitude may feel something different, which they sometimes describe as a sense of calmness or inner peace. Your mileage may vary, but there will be some emotional reaction to the scene that kicks in a few hours or days later and may last several days.

Another aspect of post-scene emotional reaction, incidentally, is something that can feel like withdrawal symptoms; a need to experience that intensity again, or at least some parts of that cycle of imagination, anticipation, experience and reaction again.

And as the experience becomes part of your (joint) biography, it becomes something you might comment on as a point of reference in the relationship. If other people know about it, it might be something they want to discuss with you. If it's something you keep as a shared secret, it may be an aspect of your personality you have to guard, so that people you don't want to know about don't get to find out.

I guess the key point is that people want to go through (or give) physically painful and perhaps psychologically difficult experiences for a range of motives. Some of these may be because people do have a sexual response to the pain and/or to sex after the pain, etc.

But even if this isn't the case people may want to experience these things because planning and anticipating them, and having had that experience, bring their own emotional and sexual highs. In the case of submissives, depending on the nature of their submission - because there isn't just one type of submission - they may seek to experience the pain even if they don't enjoy it sexually, because that's their gift to their dominant, or a ritual they need to have performed on their flesh, or literally a part of a shamanistic or spiritual ritual. Some subs need to feel 'broken', i.e. to experience overwhelming force that coerces them to do or consent to whatever their dominant wishes. And I'm sure I'm just scratching the surface of motive at this point.

The issue I have with the story I'm writing, incidentally, is that it starts mid-scene and has to track backwards and forwards to explain the context - why this scene, the motivations for being involved in it and the expected post-scene state of mind.

Just so you know. I just did a guest post for billierosie's blog.

It's my take on being a dominant - a personal point of view because one size doesn't fit all, so make of it what you will.
Posted by Fulani at 08:44 No comments: Links to this post

Voodoo Fetish. My latest novella, out with Xcite Books now. 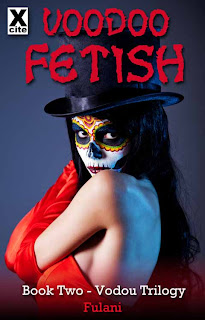 If you think that's weird, by the way, bear in mind I know a few people whose own experiences with sex magic - as both practitioners and recipients of healing - are close parallels.

Eloise is back in England, believing she’s left behind her the weird sexual experiences and voodoo rituals that shaped her time on “that island”. But an encounter with a dead witch in a London graveyard lets her know the spirits still have need of her, and the miraculous healing powers she can channel during intense, BDSM-themed sex. Can Eloise and a group of like-minded fetishists help save the life of a girl who’s tried to raise a demon, and can she free herself from her obligations to the mysterious Baron Cimitière?

Buy it at Amazon.com or Amazon.co.uk.

If you like it and want the backstory, it's in Ridden - here are US Amazon and UK Amazon links.

Posted by Fulani at 02:54 No comments: Links to this post