Vampire Skye reviewed, and some other stuff 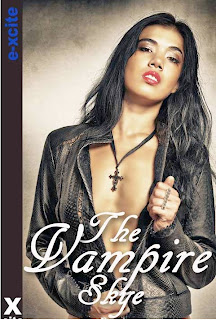 First, the good news. Xcite published a novella of mine, The Vampire Skye, at the back end of last year and it's now been reviewed by BookAddict at The Romance Reviews under their GBLT topic heading (it's a lesbian story). The key bit is:

The Vampire Skye is available in ebook and other electronic formats from Xcite Books, from the Kindle stores at Amazon.co.uk and Amazon.com, in Nook format from Barnes and Noble and probably from other places as well.

And now for the annoying news: if you weren't previously aware of it, PayPal has decided to enforce regulations against its use as a transaction system for certain types of erotica, principally of the nonconsensual and quasi-incest varieties. The Huffington Post has the most concise reporting on this.

OK, so it's not the kind of erotica I write or read, and in principle my novella isn't affected (and nor is any of my other writing): but the regulations are being implemented in a typically hamfisted way and causing all kinds of problems for publishers who don't, actually, publish material that infringes the new guidelines. And why does a payment processor decide it's their business to have a moral stance on what people are buying, anyway? A legal stance I can understand: banks and payment processors have legal obligations to prevent money-laundering, etc. But would I, in my everyday life, continue to do business with any other kind of company that felt it should have a say in my moral welfare? Well, no.

There was, for those who are interested in the wider implications, a similar go-around with credit card companies last year: they threatened to withdraw facilities from companies that 'weren't consistent with their brand image'. I would have thought their image was that card transactions should be as easy as cash, but apparently not. It didn't affect a lot of 'adult services' providers anyway, who have long since bit that particular bullet and use a network of processing agencies that handle 'high risk accounts' - for an additional fee, of course. But publishers had to react, and Pink Flamingo, who publish my Secret Circus novel, ended up removing it from their own website (along with the majority of their other books) and selling via eroticbooknetwork.com, which uses different card payment processors who weren't affected by the shift in US card company policies.

The only new thing about all this is that erotic writing has suddenly come to be seen as part of the 'adult services industry'. Adult services themselves have a long history of difficult and tangled relationships with the financial sector, as a 2004 article from Forbes magazine indicates (there's an earlier 2003 article as well). In the 2004 case a card processing company that specialised in adult services accounts had its agreement terminated by its bank, was taken on by another bank (weirdly, one based in the Mormon homeland of Utah, which raised many eyebrows) and was then taken over by a larger card processor that itself has since been bought out itself by an even larger one. The whole process resulted in payments to hundreds if not thousands of adult services companies being disrupted. Also, here's another 2003 Forbes article about how the whole banking sector blows hot and cold over the adult industry, often with banks soliciting transactions at one time and then shutting up shop when they find their involvement embarrassing. Unsurprisingly, the 2003 article fingers PayPal as a big transactions channel for adult services - and at that time they didn't seem to have any problem with it...

So publishers are now chasing their tails to set up more robust and morality-proof payments systems, and of course small independents and self-publishing authors are for the moment going to be the losers. No doubt in the longer term, new options will emerge. There are already anonymous internet banking companies, virtual currencies, token-based systems and the like and if PayPal and other mainstream companies want to impose their corporate vision in this kind of way, the likelihood is that other structures will come onstream fairly quickly and be used not just because people want to buy erotica but because substantial numbers of people will, on principle, no longer want to offer business to a company that tells them how they can and can't spend their money (though no doubt some people will continue to use them because they agree with their morals!).

And if they can decide erotica isn't something you can buy using their payment mechanisms... is that the thin end of a wedge that will mean they'll start making other restrictions on moral grounds?
Posted by Fulani at 05:05 No comments: Links to this post