If you're not aware of Terrance Aldon Shaw, you should be. He's both an erotica writer and a prolific reviewer on his Big Brain Erotica blog. And, yes, he was one of the people who put a very complementary review of my Museum of Deviant Desires on Amazon - even though I don't know him and have never met him (in relation to which, there's another blog post coming about the strangeness going on with Amazon reviews). 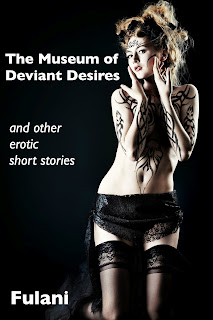 Anyway... He's just published his Big Brain Erotica Best of 2012, and I'm pleased to say my Museum of Deviant Desires made the grade.

His other choices were from Shanna Germain, Elizabeta Brooke, James Wood, Adam Penenberg, Andre San Thomas, Smart Smut and Big Ed Magnusson - so I feel I'm in great company there, and probably the junior of the pack.

And it's available from Smashwords, Barnes & Noble (for Nook users), Kobobooks and of course Amazon.com  and Amazon.co.uk.
Posted by Fulani at 11:46