Erotica, but not as you know it 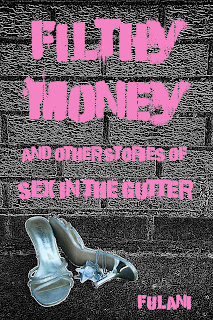 I’ve just self-pubbed something you might or might not see as erotica: Filthy Money, and other stories of sex in the gutter.

The publishing process itself was a steep learning curve. First edition not sufficiently well proofread; second edition lost a bit of formatting in the Smashwords 'meatgrinder' (their term for the automatic conversion processes for e-publishing); third edition good, but failed Smashword’s premium catalogue submission due to not using markers (three or four asterisks) at section breaks, and having no first line indent at the beginning of each section – this part of the process isn’t automatic, but down to review by an actual human. Previous humans hadn’t seen these as problems, but never mind. The fourth version is ok and I wanted to get to that stage before promo-ing the collection.

Having got it on Smashwords and their premium catalogue - which distributes to Diesel, Ebooks-Eros, B&N and several other places - I don't have any enthusiasm for going through the same process with Amazon yet. Maybe some time in the future.

What it is: eight quasi-erotic stories of desperate sex, sexual perversity and moral degeneracy from the margins of contemporary society. It’s set in a dystopia that actually exists – in social science literature it’s often called the underclass, though how the underclass is defined is a variable quantity. Political writers like Charles Murray turn up their noses at those who are ‘welfare dependent’, ‘feckless’, having kids outside marriage and so forth. Other more liberal writers point to the role of international capitalism and neoliberalism in reducing the life chances of the poorest, to the point that many are not only unemployed but excluded from much of what we might reasonably describe as civil society. They also, incidentally, point to the increasing dependence of the middle classes on welfare as 'professional' jobs become deskilled, and the prevalence of births outside marriage and 'reconstituted' families following separation and divorce in the middle classes; these trends don't just define the underclass any more. Or alternatively, more people with middle-class backgrounds are becoming members of it. If you want to know, I tend to side with the more sympathetic view of what 'underclass' means.

Over the years I’ve known a lot of people who qualify for the ‘underclass’ tag. I know their world and as the blurb for the book says, it’s an unstable world where anything can happen, reality is perverse and perversity is normal. People in that world find their pleasures any way they can, and it’s often a way that’s chaotic and wild. They often end up having desperate sex in ways that can sometimes lead to trouble and more chaos. I have, frankly, edited out parts of the chaos that involve alcoholism and serious violence, but left in – and, in fact, substantially toned down – the bits that involve drug use, the police, and psychological problems including self-harming. Much of what I’ve seen first-hand would frankly be more suitable to a horror collection rather than an erotic one.

It doesn’t, by the way, include the story of what happened to someone who was kidnapped by a drug dealer because their boyfriend didn’t pay a debt. And it doesn’t go into any detail of the sexual dynamics of couples where both parties are self-destructive and manipulative. Maybe those are for an even darker collection.

I wrote most of the stories as a form of exorcism, because I'd had the ideas running around in my brain and didn't know what to do with them, other than share them with you. It hasn't completely exorcised them, but at least I feel better now...  I don't know whether the collection will be attractive to readers, if only in a tight lipped 'Eeew, that's really nasty' way. Possibly not. I'd be gratified if you did like it, but you may not want to encourage me.

So what would be your motive for buying this collection? I’ve described it as quasi-erotica. It has a high urban grit content, plus a lot of sex. It has a lot of irresponsible and dangerous sex entered into by people who really, profoundly, don’t care about the problems it will bring because the world’s unpredictable anyway. It has sex between people whose fantasies are utterly against the norms of political correctness and polite society – though as we already know, many people’s fantasies from all walks of life are politically incorrect and brutally transgressive. It has sex that is chaotic, perverse, pleasurable, and pleasurable because it’s perverse.

And remember, in reading this, that morals are an affectation of those who have the financial resources to afford them. Read responsibly, and if any of what you read troubles you, just remember that it probably has really happened somewhere, sometime, pretty much the way the story tells it.

The link again: Filthy Money, and other stories of sex in the gutter.