The triumph of imagination...

Second life has been turning up on my radar periodically for a while now, for a few reasons. So I’ve been investigating.

SL , for anyone who hasn’t encountered it, is a virtual world in which you (i.e. your avatar) can wander round, interact with others and do a lot of the things you might do in the first (‘real’) life – work in a shop or buy things there, go to events, be a DJ, chat people up and have sex with them. You can of course own things that wouldn’t be easy to own in your first life – a genie in a bottle, a sword of aetherial flame, and so forth. You can do things you wouldn’t normally do in your first life, whether that’s sprout wings and fly (or have your own jet airliner, or use a flying vacuum cleaner), design shoes or be involved in sex parties (or organized crime for that matter). You can change your skin tone, body shape, hair length and tattoos several times a day if you want. You can even become ‘pregnant’ and have a baby, presumably without worrying about its long-term care or stretch marks.

You can even be someone (or even several people) you wouldn’t normally be – middle aged men can be young women, young women can be 150 year-old vampires, vampires can be warlocks, etc.

SL has a whole bunch of real-world uses. Some universities, for example, use it to teach science students by distance learning in virtual labs. Some companies reputedly use it to hold virtual conferences. Disabled people use it to lead the kind of life or lives they’d never have in the real world, and presumably abled people use it the same way.

But sex is in the virtual air. The featured fashion items of the day are mostly rather skimpy outfits that would go down well in nightclubs or at fetish events: a ‘sinner’s leather dress’, samurai outfit, and things that look like delinquent schoolgirl wear. 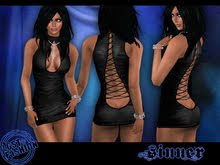 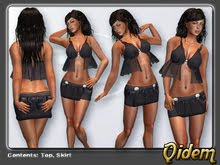 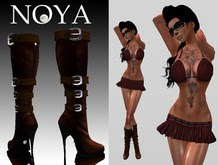 But of course. Why on earth would you want to wear stuff in your second life that you could equally well wear in your first? (I'm assuming it isn't cold and doesn't rain in SL. If you can in fact wear clothes like these in real life outside of a nightclub or fetish event and get away with it, congratulations! And no, I can't remember who the vendors are or the proper names for these outfits, sorry).

Nothing wrong with that – SL is about, I think, exploring your imagination. There’s no point in being sniffy about people doing stuff in SL they don’t do in real life because, erm, that’s the point of it. And in SL, as you'll see in a moment, it's possible to do stuff that's not just illegal, but physically impossible in real life.

Meanwhile, it continues to amuse me that the following kinds of products appear to be popular. They're not in any particular order!

Asylum Gurney. L$400. A gurney with straps which hold the victim / patient helpless. The device is a vehicle, and may be wheeled about by the operator.

Sex Table Sightseeing. L$99. You wanted to stare into her pussy forever? Here she lays on the talbe - just in front of you. You smoke your cigar while you keep her waiting.

Sculptie Bang Penis Weirdiculous. L$50. A specially sculpted penis for for your avatar.

Pissing Guy with Noobie Friends. L$99. Complete your urban or grunge scenery with a guy pissing in the corner!

Certificate of Vasectomy. L$30. Men! Are you worried about being surprised by pregnancy of your partner or girlfriend! Now you can sidestep that situation...

Baby Helspawn 5 Pack. You can either be the predator or the victim, if you play the predator [ a ‘demonic hermaphrodite’] you can have your fun, raping your victims and making the bitches carry your unborn helspawn… Victims will, allegedly, grow to enjoy living in the ‘corrupted world of demons’ and becoming a ‘surrogate whore of the abyss’. They experience ‘19 random emotes timed to humiliate you every 15, 30 or 60 minutes,’ though fortunately it appears gestation is over 16 hours rather than 9 months…

You can see what I mean about the triumph of imagination, I guess...

By the way, the extent of sex on SL resulted a while back in the 'adult' part being located behind an age-restricted barrier, so several of the items described above, which I came across before that happened, won't now be publicly visible unless you're a member.