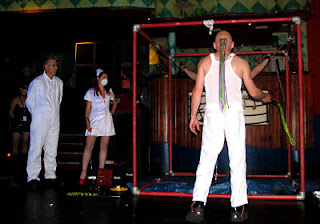 So on Sunday night I was at a gay club, walking down the stairs, on my way to the van with a couple of long metal poles - because you did know I have a lock-up full of kit that occasionally gets used at fetish events, right? And the club had been using it over the weekend - and two gay guys were walking up the stairs.

I stop to let them pass, and quick as a flash one of the guys turns to the other and says 'Look out, man coming with a big load!'

I thought it was funny, anyway.

Random musing: I just did a mental check, and despite identifying as a straight male, I can only think of a couple of friends of mine who are also straight males. They're virtually all gay men and lesbian or bisexual women. So despite being part of the straight 'majority', I seem to be moving almost exclusively in queer circles, in which I'm clearly a minority!

Oh, and as far as kit goes: among other things I have a small cage, a St Andrews Cross, a scaffolding cube with multiple attachment points and many uses, a whipping post, a spanking bench, a cargo net on a large frame, a bondage bed and some other stuff. Happy to hire it out, though obviously it's kinda big stuff that takes up a lot of room, so we're talking events more than private parties... The pic at the head of the post is the 'cube', in use at a fetish performance at a goth event a couple of years ago.
Posted by Fulani at 16:45