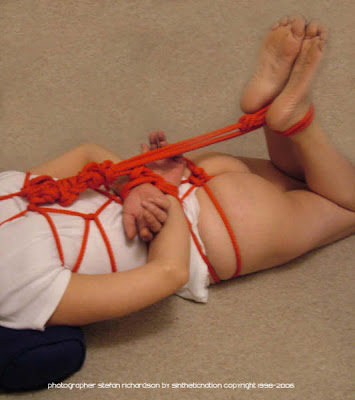 Out to my local fetish club, Dominion, last night. The first time in quite a while. It was good to meet up with some old friends, and I watched a pair of local kinksters do a bondage performance. It was essentially Japanese-style ropework, with all the right culturally-specific accoutrements - a kimono, even the special socks with the separate big toe.
OK, so much of what we think of as 'Japanese' bondage isn't particularly 'traditional', dating back to the late 1800s or early 1900s; earlier use of bondage in Japan had often revolved around the capture and interrogation of suspects and could be extraordinarily brutal. Equally, some of it isn't specifically Japanese but evolved, ironically, in response to Western influences (including, I was once told, the influence of publications by John Willie) in the 1940s/1950s, or was possibly even a Western - specifically, American - development on older practices.
But let's put all that aside for the moment. The performance reminded me of how sensuous bondage can be. It's a slow process, ropes being layered and interwoven, and the effect on the 'victim' is almost hypnotic, with sensations building gradually as each new layer of rope is applied, and possibly stimulating also in terms of anticipation of what might happen next. I might add the effect on the audience was much the same...
So the nice thing about it was the timely reminder that bondage is, or can be, a slow, sensuous thing of art and beauty... My thanks to the two performers, who I deliberately haven't named here.
For the especially interested, you can read more on the history of Japanese bondage on Tatu's page, and in Richard Cleaver's commentary on Japanese traditional bondage; there are also more general thoughts on the 'Way of the Rope' (also by Tatu), and a recent cultural commentary by Midori on the CarnalNation website: Shame, Taboo and the Real Japan.
Oh, the pic at the top of this post doesn't come from last night - it's one from a while back, the photography is by Stefan Richardson, and it was an illustration for a how-to I wrote that was published in a now-defunct magazine, Midlands Fetish Scene. You'll see my own ropework, which is featured, is fairly rough and ready unlike that at Dominion last night!
Posted by Fulani at 12:19